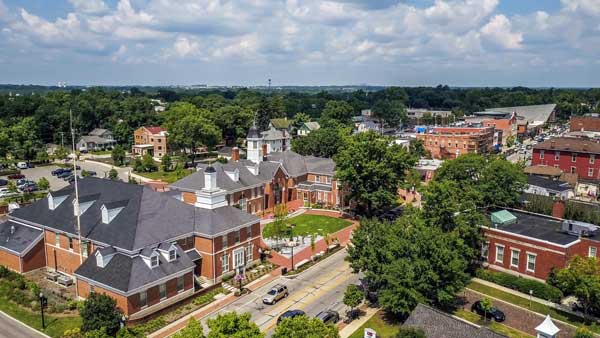 Are you looking for Heating, Cooling, or Indoor Air Quality Services in Westerville, OH? Trust the experts at Upper Arlington Heating & Air. We specialize in the repair, maintenance, and installation of furnace, heat pumps, air conditioners, and more. We service all brands and types of HVAC equipment in Westerville, OH. We look forward to providing you with a trusted HVAC solution. Give us a call today!

In what was once known as the “Dry Capital of the World,” the City of Westerville is a northeastern suburb of Columbus located in both Delaware and Franklin counties. With a population of 41,103 as of last year, Westerville is home to Otterbein University.

For millennia, ancient cultures have lived in the Westerville area. Paleolithic Indians, and their descendants that followed, inhabited the area between Big Walnut Creek and Alum Creek. When Europeans arrived, the Wyandot Indians were the main inhabitants of the land, residing along Alum Creek mostly. However, they were forced out of Ohio in the year 1843.

Around 1810, the area that is known as Westerville today was settled by those of European ancestry (Dutch to be exact) who came to the area from New York. In 1856, Westerville was platted. It became officially incorporated in August 1858, when the town’s population was 275.

During the Antebellum era, numerous homes in Westerville became stations in the Underground Railroad. Among these is the Hanby House, which is listed on the National Register of Historic Places. It earned dedication as a museum in 1937 and is now owned by the Ohio Historical Society. In 1859, the town passed an ordinance that prohibited the sale of alcohol.

On. Oct. 15, 2019, Westerville hosted the fourth 2020 Democratic Primary Presidential Debate, with more than 12 candidates on stage. To this day, it is the largest primary debate in American history.

Upper Arlington Heating & Cooling is honored to serve homeowners in Westerville, OH with the most trustworthy HVAC products and services at the most competitive rates in the area. We’re the preferred local HVAC contractor of choice in the Franklin County and Central Ohio area for heating and cooling services.

We offer same-day emergency services for heating and cooling equipment, 24 hours a day, 7 days a week, including weekends and holidays! Furthermore, we offer expert installation for those needing a new air conditioning system, heat pump, or furnace in their Westerville, OH home.

We’re also excited to offer Westerville residents our year-round Service Maintenance Agreements if you’re looking to get the most from your A/C, heating system, furnace, or any other HVAC system with preventative maintenance, which should be done every year to keep your manufacturer’s warranty valid.